My Day Volunteering With @ORDLawyersHQ (Updated)

I hurt my back (and broke some bones in my foot) a few weeks ago: I have scarcely left the house since then. Just as I was starting to feel better, Friday’s Executive Order regarding immigrants from seven particular countries was passed. I don’t consider myself part of a “Resistance,” and I am not an open-borders advocate. But the way in which that EO was implemented was, in my opinion, an insult to the rule of law. And if the rule of law fails we are in graver danger than a thousand terrorists could hope to cause us. So I volunteered for an afternoon shift with @ORDLawyersHQ, the pro bono legal observation and assistance group operating out of O’Hare International Airport in Chicago.

Fortunately, my back tolerated it (though I was about out of gas by the time my shift ended) and I didn’t have to walk around, so I feel okay about it. (And yes, I’ll be back in the office soon. 🙂 ) I’m very gratified and happy to have participated in this effort. As one Twitterer observed, our new President has done the impossible: he’s transformed lawyers into superheroes. And the people running this are heroes. Just the value of their time is incredible: I suspect that the team I was on would bill in or nearly in the five figures per hour. That means my shift constituted probably at least fifty thousand dollars worth of legal fees. That’s one shift, one day, one airport. Plus a major law firm donated a nice printer and a free Wi-Fi hotspot for us to use and sent one of their senior IT people to set it up. Donations of food and coffee, if you’ll excuse the expression, poured in. Thanks to Eastman Egg Company and the Goddess and the Grocer, as well as Metropolis Coffee. (I don’t drink coffee, but everybody else was happy.)

First of all, I did my shift on Thursday. It was far from the chaos of the weekend and early in the week: CBP/DHS had reversed some of their harder-line positions and the court orders were kicking in. Lawyers can organize like nobody’s business and protocols and allocations of responsibility were pretty well implemented. We had only two serious “possible risk” situations during my shift: one resolved shortly before I left and the other was a private visa matter unrelated to the EO. We had some situations of concern which were due to occur this evening: I don’t have any information on them.

I had volunteered to be a shift leader/point of contact: the outgoing shift leader gave me some protocol documents and showed me all the responsibilities that needed to be allocated. I thought I was going to be the only shift leader but an amazing attorney who had already done a shift lead jumped in. (Hi, Rebecca!) We sort of naturally settled out that she handled most of the interfacing with the various matter managers, and I mostly did logistics. We cooperated and consulted quite a bit on some things, including on when to kick things higher up the chain.

The most visible matter was the canvassers, those people you’ve seen pictures of holding signs asking travellers if they need help. What may not be clear from most reports is that those people are standing next to where passengers leave security: the canvassers can’t go into the secure areas near the jetways. We were usually contacted by friends and relatives who were concerned that the people who they were meeting were not coming out of Customs after their planes landed. They were under the guidance of a canvasser leader (Hi, Sharada!) who I texted when I had any information on when a flight with potential detainees was incoming.

Aside from being a point of contact, I was also monitoring incoming flights with a very slick dynamic document someone had set up that constantly fed me information on arriving international flights. When one was from a country that seemed likely to have potential detainees, we would take extra care to try to see if anyone needed help. We also asked people coming off the flights if they had seen any unusual activity. If so, they would answer a short questionnaire either with a canvasser or by coming back to our activity center and talking to the intake manager.

The intake manager was fantastic. He not only managed all the data we got from travellers and waiting friends and relations, he reviewed our documentation in response to information requests from multiple groups, including one looking for potential violations of the orders for a possible Motion to Compel. (Hi, Nima!) Also, he spoke Farsi. A really versatile and helpful fellow!

We also had a social media person who was tweeting and posting to the Facebook group. I was sort of surprised how many attorneys (most of whom were much younger than I) didn’t use Twitter and weren’t even familiar with how it worked. Sometimes I forget that I am a tech attorney, as well as a big old geek, and other people just don’t care about this stuff. That went well, although we had some Tweets from people asking for help with the aforementioned private visa matter. That was tough: our options were limited.

At one point, I talked to a reporter from the Wall Street Journal, although I had one of our very able immigration attorneys (Hi, Yvette!) listen to what I said with instructions to stop me if I said something stupid. Fortunately she didn’t have to jump in, although she also answered some of the questions for which I was very grateful. We had reporters from the local NBC affiliate doing bumpers every so often, though so far as I know they didn’t interview any of us today.

UPDATE: The reporter, Tammy Leitner from NBC 5, did show us at the end of a story on a local artist affected by the EO. The intake manager, Nima Taradji, is also interviewed in this segment. Ms. Leitner, by the way, was very friendly and courteous when she was filming in our clinic.

A Chicago artist caught up in President Trump’s travel ban. Her story, like so many others, is personal. @msnbc https://t.co/a0NPOVDWAQ

I also talked to a representative of a local Congressional representative, who was trying to help a constituent (again, the private visa matter.) She was very appreciative of the work we were doing and offered the Congressman’s support if we could use it.

The afternoon flew by, though we weren’t overwhelmed and there was time for discussion of the situation in general as well as some rather sneaky new tactics one of the people pulled out for secondary inspection told us about. I genuinely enjoyed meeting and talking with every single attorney and volunteer. There were several non-attorney volunteers who were interpreters and also helped with canvassing.

One thing we did not do was provide legal advice directly to anyone, and we certainly didn’t prepare any habeas motions or anything like that. By this point, that is being handled by people higher up the chain, including the ACLU and some dedicated attorneys at large law firms who are receiving our intake information and taking necessary actions. Sitting on the airport floor filing habeas motions was an emergency thing, assuming it actually happened (I wouldn’t be surprised, but I don’t know.) It’s no longer necessary: we were functioning as much as legal monitors and community outreach as actual immigration advisors.

Customs and Border Patrol definitely knew we were there: we didn’t interact with them during my shift, but the incoming shift leader (Hi, Alex!) said he had on an earlier shift. He was considering asking them about the matter that resolved right before I left, but fortunately it resolved before that was necessary. And at one point I stepped across the hall to get a drink at McDonald’s, and the two men ahead of me were uniformed CBP agents.

“This could be interesting,” I thought.

One of them turned around and saw my badges. I nodded and said, “Good afternoon, gentlemen. I hope things are going smoothly.” One of them responded very politely, “Afternoon. They’re going pretty smooth.” Things were quite cordial. Some police also stopped by at one point and asked if we knew about any planned protests. They were very friendly about it. We told them protests weren’t really our department and we didn’t know of any, but it seemed quite possible.

So, in summary, volunteering at the airport, at least at O’Hare, is not exactly something out of a legal drama, but it was good, useful work and I’m glad I did it. If you are an immigration attorney and/or an interpreter, please consider volunteering if you live near an international airport or other port of entry. Otherwise, you should still think about it, but be patient: right now they have plenty of volunteers and interest will probably drop off. Unfortunately, the need will probably not drop off as fast, so please keep in touch with your local volunteer group: they may need you well after the next crisis pulls media attention away from this one. If you are interested, here are some links: 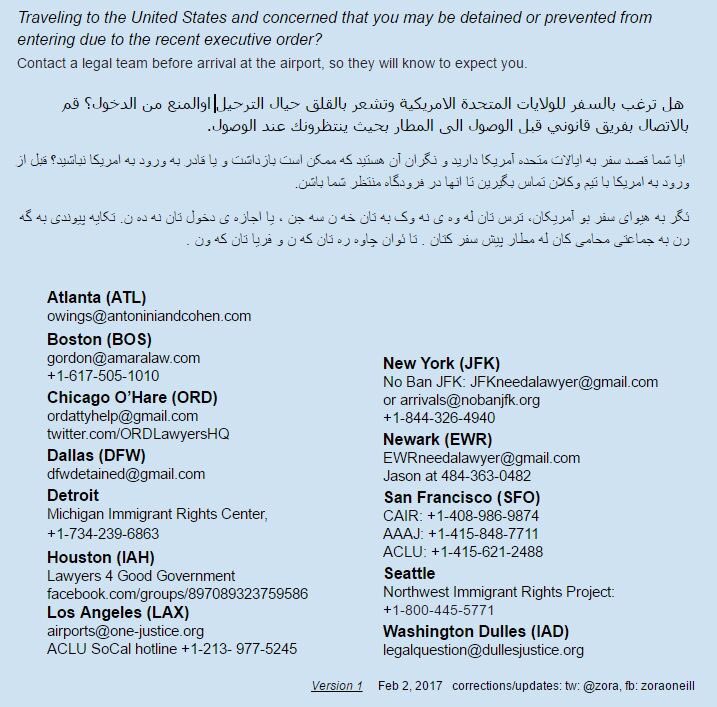 Hang in there, everybody. It’s going to be a long haul. But we’re all in it together.

(If you have questions, feel free to ask them in the comments and/or drop me an email.)

Tweet
Followup: Why @ORDLawyersHQ Is Still On The JobWow, MAGFEST, Again!