In a nutshell what happened was this: A content producer called “Fourth Estate,” clever journalism reference et cetera, licensed some articles to a website called “Wall-Street.com.” WSC canceled the license but left the articles up on their website. Putting the articles on the website without a license is (potentially) copyright infringement, and Fourth Estate sued them.

No One Can Hold The Wind: Control Over Art Released Into The Public Domain

(The author of this post is a licensed and experienced intellectual property attorney, but nothing in this post should be construed as specific legal advice. Consult an attorney licensed in your jurisdiction and familiar with the relevant law before making legal decisions.)

“Public domain” is a very slippery term, legally speaking. What it usually refers to is an artistic creation that either predates modern copyright law, or for which the copyright has expired – in other words, there is no applicable legal copyright in the work. Once something is in the public domain, anyone may use it in their own artistic creations. (Though this may create a new, copyrighted work, to the extent that the new creation comprises an original artistic creation beyond the artistic elements of the integrated public domain work.)

There’s no way, under US copyright law, to “release” a copyright before it expires. (This is a conversation I’ve had with other copyright lawyers.) Since neither registration nor notice are now required to create a valid copyright, it’s literally impossible to create a new work and have it NOT be copyrighted. However, one can release an artwork and offer the public an unlimited license to use it. Technically, such an artwork is still under copyright and is not “in the public domain,” in the way lawyers use the phrase, but for practical purposes, it may be thought of as being in the public domain.

That is just a little background for the actual topic of discussion for today, which is a game developed by indie developer Jason Rohrer called “One Hour One Life.” Mr. Rorher has an unusual business model: He “releases” all of his games into the public domain, and makes money from his creations in various ways that don’t involve strict control of the copyright. You can read about his philosophy here: Free Distribution.

Mr. Rohrer makes very good games, and between selling copies of “his” version of the games, donations, and other methods, he makes his living. But of course, you wouldn’t be reading about him on a legal blog if there wasn’t a legal issue.

The Space Quest Historian, a gaming commentator and streamer with a particular interest in the famous “Space Quest” game franchise, asked me for some comments related to Activision’s ownership and activities in relation to it. I sent him an email discussing the matter generally and he was nice enough to use it in a video. It’s at the bottom of this post.

Anyway, he’s a funny guy and this is an incredibly well-edited video, including projecting relevant bits of my email at the right times. If you’re interested in that sort of thing, this is the sort of thing that will interest you.

Video Game Preservation: Not a DIY Project, But Now A Lawful One 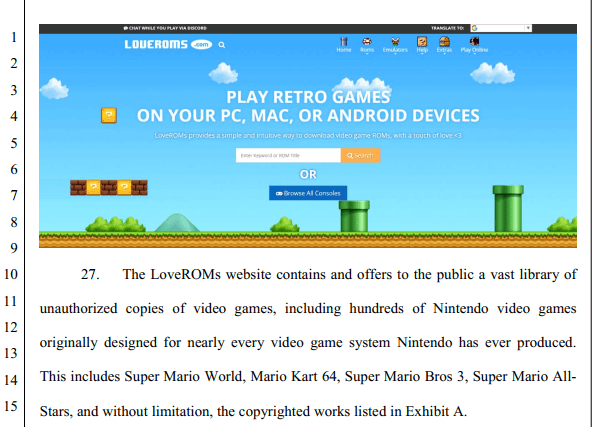 (This post was originally written for Ron Coleman’s Likelihood of Confusion blog. Please note that while the author is a licensed and experienced attorney, nothing in this post constitutes specific legal advice. It is provided for general educational purposes only. The author has made an offer of pro bono consultation related to the subject matter of this post. This may be considered ATTORNEY ADVERTISING in some jurisdictions.)

If you are into vintage video games, you probably know about “ROM Sites.” ROM sites are websites where you can download the ROM (Read Only Memory) code for classic cartridge or board-level games, such as Nintendo Entertainment System cartridges or arcade cabinet games like “Spy Hunter.” They’re not really different in kind from websites or torrents where you can download more modern software which was available on disk or CD-ROM. They’re just a little more arcane because you have to not only download the ROM code (which has been “ripped,” or copied from the ROM chips to a computer hard drive) but download and run “emulator” software, which allows your modern PC to run code written for much, much older hardware. It’s entirely doable, but requires a little effort and tech know-how.

Recently, Nintendo sued one of the better known ROM sites, loveroms.com, and won a 12 million dollar judgment against them for copyright infringement. Here’s a copy of what was the front page of loveroms.com from the complaint: END_OF_DOCUMENT_TOKEN_TO_BE_REPLACED

I moderated my first Anime Central panel yesterday. It was a variant on a panel I’ve done before, which I call “GeekLaw: Law, Pop Culture and Creativity.” I managed to spend most of the day at the con, so I thought a little recap might be fun. Please note that if you were at the panel and you’re looking for the presentation materials, here they are:

I arrived about 11AM and it was touch and go whether I’d even get a parking space. The convention center’s lot was so full it was blocked off already. Fortunately the Hyatt still had a few spaces (the convention is held at the Rosemont Convention Center, which is physically attached to the Hyatt hotel.) Unfortunately, that lot costs a lot more, but you gotta do what you gotta do.

But at least I found a space and was able to make the first panel that had caught my eye, “Scum & Villainy: Why It’s Good to be Bad.” I was under the impression this would be a how-to panel, but it turned out to be how to write about villains. Which was obviously disappointing but it was still a fun panel.

After that I went through Artist’s Alley, which was much better laid out this year than last year – one aisle was still a little tight, but you could get by. I picked up a cute little sketch zine from Lisa Imas (http://hashtag-art.tumblr.com/) called “things i drew when i should have been paying attention, or how i almost failed all my classes.) I got this because it reminded me of the time I almost got thrown out of a class in law school for laughing at the book I was reading when I was supposed to be paying attention. 🙂 I also encountered this retro cosplay: The next panel I went to was a fan fiction panel. As I sometimes do when fan fiction is discussed, I went to the moderator before the panel and mentioned that I was an intellectual property attorney and that if any questions about legal issues came up, they were welcome to call on me if they didn’t have their own legal expertise.

I’m sure you can tell what happened next.

The question did come up, and the moderator very graciously invited me to stand up and borrow a microphone and talk for a few minutes about the legal issues related to fan fiction. It seemed to be very well received and people commented that it was helpful. I also plugged my own panel, which wasn’t for hours yet but it seemed only fair. So thank you to moderator Pearson Mui (http://www.jurai.net/~pmui/adintro.html) for asking me to speak.

With some time to kill, I headed back to the show floor and scoped out some cheap manga books, as well as running into these two:

In one of the cleverest (and most adorable) mashup cosplays I have seen in a long time, that’s Sailor Ladybug and Tuxedo Noir. (That’s what I call them, anyway.) I had to leave before seeing quite all of the floor because I wanted to attend a panel called “Copyright 101,” put on by Kumate Works. I admit that I went to this to see if the information being presented was reasonable, because while I try not to be obnoxious about it, if I see a presenter giving information that will get somebody sued, I will say something. However, my concerns were completely unnecessary. The presenter knew her stuff and had consulted with an intellectual property attorney to develop her presentation. It was excellent. Once again, I got outed, but once she knew I was an IP attorney I kept my yap shut unless she asked me for confirmation of something. I was very impressed.

Then I had to bolt around the panel room area to get to a paneled identified as “Game Development – The Crash Course.” It was put on by Mark Kakareka of Guilty10Games. Promising to be a “crash course” in the basics of game development, the panel delivered quite well in my opinion. Acknowledging that he couldn’t teach anything of practical substance in 45 minutes, the presenter instead hit the big picture elements – have a plan, write it down, do a design doc, use tools appropriate to your technical skill level – and provided some examples of each. I thought it was about as much as you could ask from a one-hour panel on a topic that you can literally get college degrees in. I got made again when somebody asked a legal question and I volunteered to answer it, but once more I apparently wasn’t too obnoxious and nobody seemed to mind my assistance.

I thought about going to another panel but the show floor had just closed and there were huge lines to pretty much everything, so I took a little break. When it got close to time, I went to the panel room I was in only to find that the panel going on in it was being run by a person I follow on Twitter, @Homura_Bakura. Her enthusiasm and happiness to be talking about something very dear to her was really amazing and while I did come in toward the end, everybody was obviously super happy to be there, so well done. After saying hi while she was on the way out I got set up for the panel.

I was stunned to see that even though we were doing a law education panel at 10:30 on a Saturday night, there were about thirty people waiting to come in. Thank you so much to everyone who chose to use part of their Con Saturday night to be with us! Thanks also to my fantastic co-panelists Sam Castree (http://www.twitter.com/indiegamelawyer) and Diana Qiao (http://www.twitter.com/dianaqiao.) The panel went great, we had wonderful questions, and everybody put up with my rambling far better than I could have expected. (It was a long day.)

Then I went home and passed out.

So thank you again, everybody, and hopefully I’ll see you again soon!